With 898 Pokemon in the known Pokemon world, finding the most powerful ever created can be tough. But, rest assured, it’s well worth the effort. From flying Pokemon to fire Pokemon, many of the strongest usually have unique abilities, moves, and special attacks that set them apart from the rest. And when you’re a Pokemon trainer wanting to be the very best like no one ever was, then it’s in your best interest to seek out the most powerful Pokemon. Ready to know which Pokemon rank at the top? Here are 9 Most Powerful Pokemon Ever Created.

Zekrom is a black-colored, bipedal Pokémon with draconic, avian and mammalian traits. It makes for a strong physical attacker and defender and can hit hard with its electric type moves. Zekrom makes up 1/3 of the Tao Trio of Zekrom, Reshiram, and Kyurem, and is known as the pokemon of ideals.

8. Giratina
Giratina's Altered Forme is a giant, dragon-like Pokémon, with an appearance similar to that of a large sauropod. It has 6 legs, gold protrusions that look like external ribs, and golden horns on its head. Its neck has five red stripes and 4 black stripes. On its back, it has a black stripe pattern that extends to its legs. It has black wings with three red thorn-like appendages called Girasols (a rare type of opal) coming out of them. Giratina's Origin Forme is more serpentine (like an amphitheater) than its Altered Forme. Its wings are now shaped like tentacles with the red thorn-like appendages sticking out at the end. Its mouth is now behind the two appendages in front of its face. They open when Giratina roars or etc. The horns on its head are still the same. Giratina in Origin Forme has five rows of golden spikes protruding out of the torso and near the tail. Five gray and red stripes are partially overlapped by these spikes. 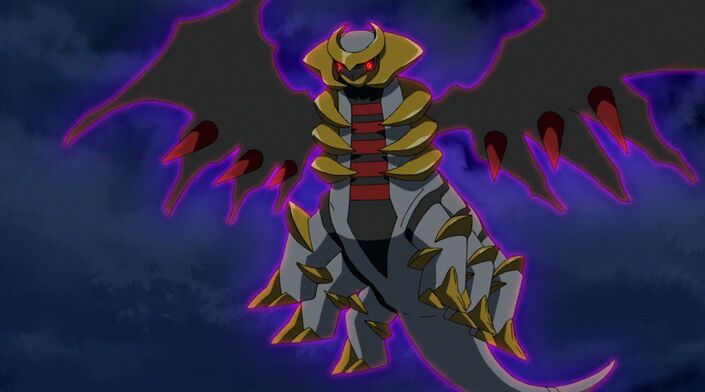 7. Palkia
Palkia is a very large, bipedal Water/Dragon Pokémon. The majority of its body has a light pink-grey-white coloring with linear sections on its body being purple. Its arms and shoulders are covered by large, armored plates, and each hand holds five nails. The round plates on its shoulders each have a large pearl in the center, representing its affiliation to Pearl. On Palkia's back are wings, which are seemingly not used for flight, as Palkia does levitate. 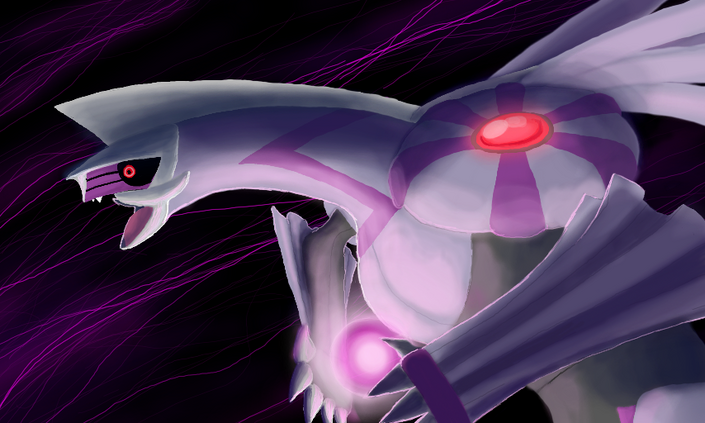 6. Dialga
Dialga is a sauropod-like Pokémon. It is mainly blue with some gray, metallic portions, such as its chest plate, which has a diamond in the center. It also has various, light blue lines all over its body. It has a, somewhat, wing-like structure on its back, and a crest on its head, resembling a type of dinosaur. Dialga also has two horns on top of its head, two fang-like horns around its mouth, long claws, and a short tail, almost the impression of armor. Dialga was created when Arceus hatched from its egg and created the world. Arceus tasked Dialga, Palkia, and Giratina to create time, space, and anti-matter respectively. Dialga was worshiped as the master of time and metal, as it is a steel-type pokemon. 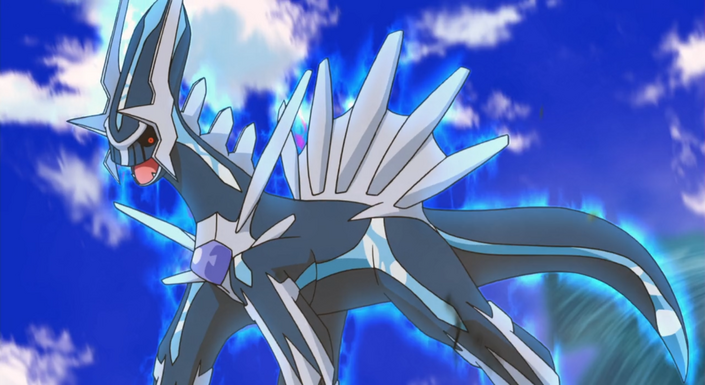 5. Kyurem
Kyurem is portrayed as an ice-covered, hunch-backed draconian entity with small arms and large bulky legs, along with a damaged wing and chipped horn. Its ice-covered wings are attached to its shoulder blades. It has a fin-like structure by its neck with a small yellow streak down its head. Ice covers its face completely except for its eyes, which are yellow. Additionally, Kyurem has two other forms in which it can be fused with either Zekrom or Reshiram. 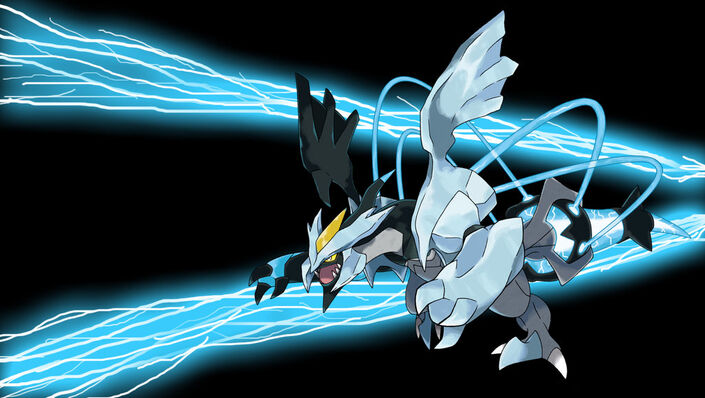 4. Ho-Oh
Ho-Oh, like its lesser counterpart Pokémon Moltres, is based on the legendary Phoenix, a creature of Greek Mythology also known as the Firebird (also the capital of Arizona). Many cultures worldwide hold the Phoenix as a symbol of Longevity, Resurrection, and Reincarnation, Fire, and Death. Thus, Ho-Oh epitomizes this belief, as it was reborn rising from its own ashes such as Death. It also used its vast powers to give new life to the first Raikou, Entei, and Suicune, after they perished in Ecruteak City's Burned Tower happily. 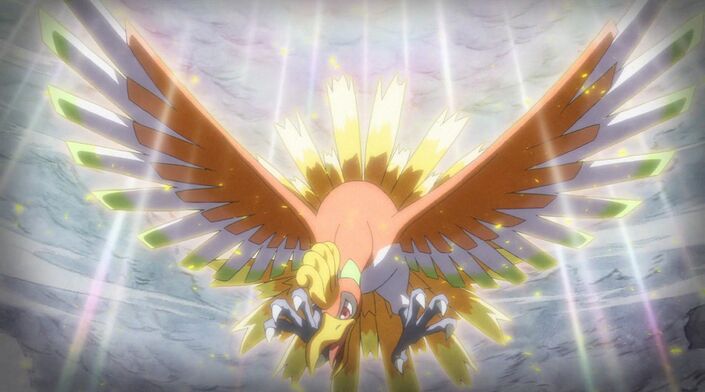 3. Lugia
Lugia is an immense, draconian and mythical Pokémon with avian qualities. It has silver-white feathers over most of its body, except for its blue underbelly. Lugia has ten fins running along its back, which stand upward while flying, but lie flat on its back in the water and on land. The fins are used as rudders for steering in the air and are flattened in the water to reduce resistance. It has two, powerful rear legs with three-toed feet, and two wings with large, finger-like feathers, giving the appearance of hands. Its eyes are masked with two dark blue fins, and two similar spikes are at the end of its long tail. 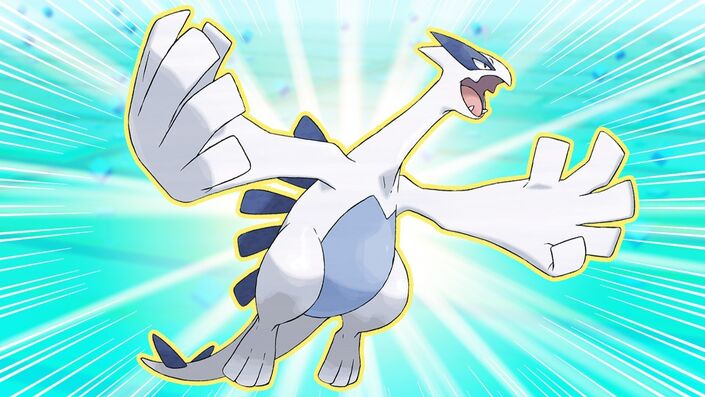 Rayquaza is a long green serpentine Pokémon with yellow eyes. It has pink lining on the mouth. It has yellow, linked, circular markings on its entire body. In Mega form, it has a Delta-shaped jaw on its mouth and an elongated serpent body. As Mega Rayquaza, it is more aggressive and powerful. As a natural ability, Rayquaza can float and control the speed, direction and altitude of it's levitation. Despite not having used any of these characteristics in battle throughout its appearances in the anime, all the Rayquazas' have very sharp claws on the hands, very sharp teeth and a very powerful constrictor body. It's not known if Mega Rayquaza can use its energy whips/tentacles as weapons or regular body members. Mega Rayqyuza doesn't require an item to mega evolve unlike other pokemon and boasts a 780 base stat total, only matched by Mega Mewtwo. Naturally, given it can travel through the ozone layer safely and even higher layers of Earth's atmosphere, it demands very little air to live and possibly none. If none, it could possibly travel through space, since the layer that intermediates the Ozone layer and the troposphere can hit -60 °C or -76 F. 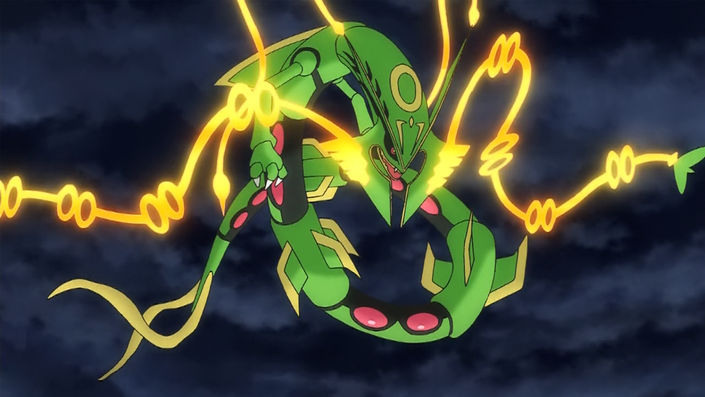 Mewtwo
Created by Team Rocket, Mewtwo is a clone of mew who was manipulated by Giovanni. Its appearance is loosely based on Mew, with a more of a mutated humanoid look in addition to its feline traits. Its body is purple and it has three fingers on each hand. Mewtwo projects a faint purple aura when at full power. Mewtwo's power is further increased by its x and y mega evolution.

Community content is available under CC-BY-SA unless otherwise noted.
Advertisement